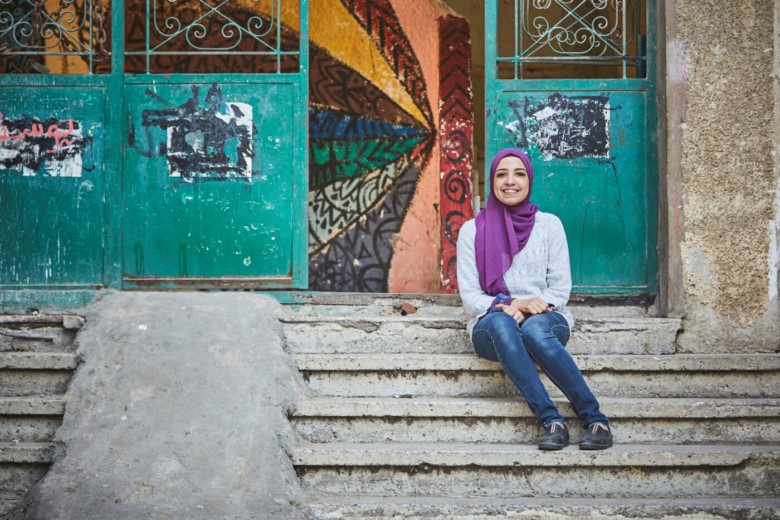 A haven for young people in the chaos of Cairo

Young people living in Cairo’s poorest suburbs are not exposed to the jobs and opportunities that exist in Egypt. The organisation Alwan Wa Awtar gives them the tools and resources they need to see beyond their narrow social horizon.

It is almost thirty years since 50,000 Egyptians lost their homes to a major earthquake in Cairo. Most of them still live in hastily-built apartments that were subsequently constructed in the city’s periphery, in an area that is now known as Moqattam.

Here, they mix with newcomers from the rural areas further south. Daily life is characterised by poverty and a lack of good health services, educational opportunities and employment.

“Our work here still meets resistance. But with every passing day, more parents gain confidence in us as they can see how it gives their children more opportunities in life.”

Tonight, a few of them have gathered on pillows and low chairs in front of a cinema screen in the clubhouse of Egyptian organisation Alwan Wa Awtar.

For the oldest of the area’s young people there are also activities in the evening. Today, they will watch the film Million Dollar Baby and use it as an opportunity to reflect on life’s challenges and how to overcome them.

Alwan Wa Awtar was founded almost 20 years ago by Azza Kamel, a tenacious and visionary lady who insists on giving children and young people a chance of a better life.

At Alwan Wa Awtar, young people meet up to discover the opportunities available to them despite the fact that they come from a marginalised suburb of the Cairo metropolis. Photo: Thomas Flensted.

“Only a few of the adults here have an education, and most of them muddle their way through life with casual work and informal jobs. The schools are of poor quality and there are often 120 pupils for one teacher. The result is that I often meet children aged 12 to 13 who can barely spell their own name,” says Azza Kamel.

Egypt is full of opportunities

The organisation currently operates four locations in Moqattam, which give the community’s poorest children somewhere to go after school. They are places to play, paint and express themselves creatively and slowly become more secure, brave and well-rounded people.

“In reality, Egypt is full of opportunities. But too many people do not know how to find them. They lack the knowledge, the courage and the qualifications to be able to apply for the job that they want.”

To start with, the idea was to simply give them a free space. The ambitions have since grown to offer a whole generation of children and young people more opportunities in life.

Alwan Wa Awtar means “colours and strings” and was founded in 2005 by Azza Kamel.

Today, the organisation operates four locations in the Cairo district of Moqattam as well as a centre in the town of Sharkia in the north of Egypt.

Alwan Wa Awtar has cooperated with Oxfam since 2018 and has been part of the Danish-Arab Partnership Programme’s activities in Egypt.

The organisation’s work is carried out in collaboration with Oxfam who, together with the funding from the Danish-Arab Partnership programme, finances courses for vulnerable young people to help them gain a foothold in the labour market.

“In reality, Egypt is full of opportunities. But too many people do not know how to find them. They lack the knowledge, the courage and the qualifications to be able to apply for the job that they want,” explains Youmna Al Khattam.

She is the head of Oxfam’s work in Egypt, and she closely follows the almost 100 young men and women who so far have been through the youth programme at Alwan Wa Awtar.

“We give them a sense of purpose, so that they will not let themselves be discouraged.”

The course covers a range of practical subjects, including CV writing, skills clarification, interview training, English classes and IT. But Azza Kamel believes that it is just as important to teach the young people to reflect, communicate and believe in themselves.

I have no doubt that we will strengthen the young people’s ability to find work.”

“Poorer parts of Egyptian society are especially rigid and very dismissive of new ways of doing things. This affects the children who are rarely encouraged to form their own opinions or to go their own way,” says Youmna Al Khattam.

She emphasises how Alwan Wa Awtar makes a point of showing children and young people that their way of looking at the world is important and valuable.

Azza Kamel adds that she has no doubt that they will strengthen the young people’s ability to find work.

“But we also give them a sense of purpose so that they will not let themselves be discouraged. We help to reduce violence in society because young people learn to get in touch with their feelings and communicate. Specifically, we also see how the young girls who come here demand – and very often receive – far more freedom than others,” says Azza Kamel.

22-year-old Ahmed Mousa Amin is an engineering student and has come to Alwan Wa Awtar since he was 10. He has mostly spent his time here performing theatre and making rap music.

An opportunity to think

One of the young women who spends time at Alwan Wa Awtar is the 20-year-old university student Habiba Nasser who is taking a course at the organisation despite her parents’ scepticism.

“They have accepted that I take the youth course here even though they think that I am wasting my time. I live on the opposite side of the city and spend a lot of my time in transport,” says Habiba.

“If I am to become a designer, I need to be courageous and creative and find the opportunities in a very competitive market.”

She has no plans of stopping at Alwan Wa Awtar anytime soon.

“What I learn here is very valuable to me. Especially that you can look at your life in a new way and evaluate the assumptions that have guided you up to this point. I have been given an opportunity to think carefully,” she says.

Even though Habiba’s parents were sceptical, they have accepted that Habiba spends her time at Alwan Wa Awtar. But she does not really care because what she learns here is extremely valuable.

Habiba would like to be a designer and she thinks that Alwan Wa Awtar has put her in a better position to realise this dream.

”If I am to become a designer, I need to be courageous and creative and find opportunities in a very competitive market. I think that the things I have learned here – like creativity, presenting an idea, and using a network – will benefit me greatly,” says Habiba.

From taboo to acceptance

Looking around the room this evening at Alwan Wa Awtar, there are almost as many girls as there are boys.

Azza Kamel says the girls are all ambitious and have a sense of purpose. And they do not seem to want to be defined by traditional gender stereotypes.

“Our work here still meets resistance. Simply because we have girls and boys together, and that we spend so much time on theatre, dance and music, which are seen by many to be taboo or at best a waste of time. But with every passing day, more parents gain confidence in us, as they can see how it gives their children more opportunities in life,” says Azza Kamel.