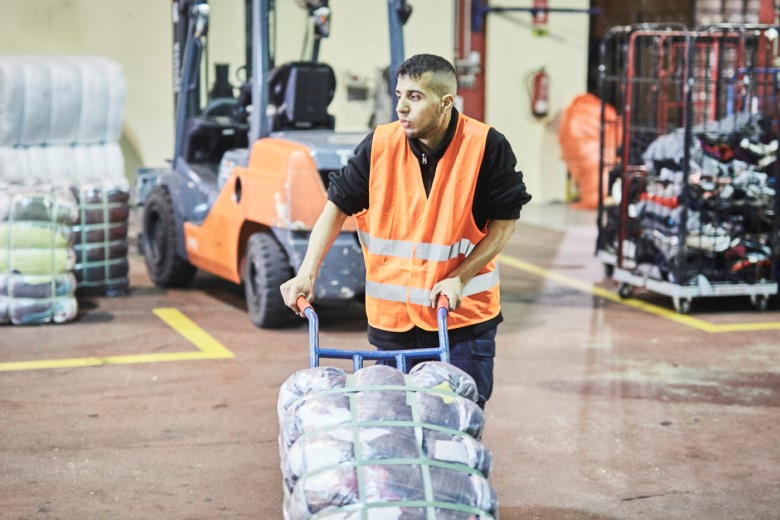 ‘I now allow myself to dream about the future.’

Home » SEARCH FILTERS » ‘I now allow myself to dream about the future.’

A good job with a stable income is high on the list of goals that many young Moroccan people wish from life. In Tangier, one of Oxfam’s local partners helps vulnerable young people achieve this goal.

With its blue metal cages, yellow plastic buckets and thousands of pieces of clothing separated into piles, bundles and plastic bags, the factory hall at the Red Textile recycling company in Tangier is hardly a tourist attraction. But compared to the busy noisy surroundings in the industrial area, the factory hall is quiet, and the harsh light from the sun is softened by the small tilting windows under the roof.

“For many young people, their goal is not a job that allows for self-realisation or prestige, but just a fairly stable income.”

Entering the factory hall,  the many tons of used clothing seem to be sitting idly. But if you find one of the many ladders positioned between the blue metal cages and then climb up a few steps, you see something different below.

Assembly lines with sorted clothes are running under the roof, feeding the 20 young men and women, each of whom sits in their small enclosures. The young people open the bags of clothing and then sort each piece, all in one single sliding motion.

Mohamed Atoui is one of the lucky ones. He now has a secure stable job that offers minimum wages, decent working conditions and health insurance. Photo Thomas Flensted

Mohamed Atoui, age 25, distributes items of clothing into yellow buckets marked with German labels like ‘Hemden’ (shirts), ‘Mäntel’ (coats), ‘Kinder’   (children) or ‘Handschuhe’ (gloves).  Coming from a disadvantaged family, Mohamed is one of the few young people  who   have successfully found a stable job in a company that offers a living minimum wage, proper working conditions and health insurance. Mohamed’s job at the Red Textile  recycling facility not only allows him to finally provide for himself, but also enables him to contribute to his parents and siblings as a responsible son.

‘This is exactly what the majority of the young people dream of. For many young people, the goal is not a job that allows for self-realisation or prestige, but a fairly stable income that will help them escape poverty and provide for themselves,’ says Oussama Badaoui from the organisation Casal Dels Enfants,  one of Oxfam’s Moroccan partners.

The goal of the Casal Dels Enfants  organisation is to fight the hopelessness and desperation that afflicts so many young people from the  – lower and middle-classes.

Today, 1.6 million Moroccans live in poverty. According to a new report from Oxfam, inequality in Morocco is rising and creating an ever greater gap between rich and poor.

This rising inequality has had a marked effect on young people from the lowest half of society, preventing them from finding a job, obtaining a stable income, having influence on their life situation and generally making positive changes in their own lives.

Morocco has many strawberry plantations and Casal Dels Enfants has helped many Moroccans get a job here.

To attack these problems,  Casal Dels Enfants has set out to get young Moroccans into the labour market. In less than a year, the organisation has helped well over a

hundred young  Moroccans obtain jobs. One of them is Mohamed Atoui. Other youth have obtained work at the ESBN car manufacturer or in one of the other major industrial companies in

Tangier. And still others have found work on the strawberry plantations in the villages between Tangier and Casablanca.

While Morocco’s official unemployment is 10 percent, in reality, at least half of all young people under the age of 35 have no education or formal job. Most of them get by through short-term contracts in the formal sector. These jobs are characterised by low pay, lack of job security, poor working conditions and no insurance should they or family members fall ill.

To find jobs for these disadvantaged youth, Casal Dels Enfants cooperates closely with large, labour intensive firms in the area, combining this networking with training and dialogue with the young people. This extra training and dialogue gives them a renewed belief in themselves while ensuring that they can carry out the job they are seeking.

‘When I first meet the young people, they were desperate for a job, but they had lost faith in believing it would ever happen. Our job is to give them hope, give them the skills needed to do the jobs available and to establish contact between them and the workplace,’ Bouchra El Ouahabi explains.

“Our job is to give them hope, give them the skills needed to do the jobs available and to establish contact between them and the workplace.”

Bouchra is a program officer with Feminist Union Action, an NGO that works with Casal Dels Enfants to help vulnerable young people find work. It was Bouchra who obtained the interview for Mohamed Atoui with Red Textile. She also prepared him for the job and for the interview in order to help him get a sense of self-confidence for the first time in his life.

Mohamed Atoui explains: ‘I was always unhappy and sad before, and I had stopped speaking about the future. Now my family is doing well, and I allow myself to dream about the future.’ Along with the job, Mohamed now has a stable income and health insurance.

From his work station high above the ground in the factory hall at Red Textile, Mohamed can view another work station in the factory, where his colleague, Lamiae Ghandi is standing over her pile of second-hand clothes. Lamiae, age 21, moved to Tangier last year with the sole purpose of finding work. After a year of getting nowhere, she was desperate.

“In Morocco, you have to know someone or bribe someone to get what you want. Young people like me do not have connections or the money.”

Lamiae’s economic situation was desperate, and she was disappointed that she was not able to send money home to her family as she had promised. She was deeply frustrated seeing all the good jobs go to people with money and connections.

‘In Morocco you have to know someone or bribe someone to get what you want. Young people like me — who do not have connections or money — can dream big, but when reality hits, we realise that all we can hope for is a fairly decent and stable job,” she explains.

After a year ofunemployment Lamiae Ghandi, like Mohamed Atoui, has been luck enough to get a job at Red Textile.

According to Oussama Badaoui from Casal Dels Enfants, inequality is a major problem for many young people in Morocco.

For those who drop out of school early. For those who attend poor schools that do not provide them with the skills, they need to get a job. And for those  — like Lamiae — who lack the right connections, or like Mohamed, who had so many rejections and defeats that he stopped believing in himself.

‘That’s why we often begin with that. By re-assuring the youth that they feel seen and heard and by restoring their confidence that they have a value to society and to a future workplace,’ Oussama Badaoui says. In cooperation with a number of other organisations, Casal Dels Enfants has established 10 centres that young men and women can contact if they are having difficulty finding work.

The young people meet a program officer who interviews them about their goals and assesses their skills. The young person is then offered specific training courses according to the skills they lack. The program officer also makes sure that the youth obtain a job interview whenever any of Casal Dels Enfants’ partners are looking for  workers. In cooperation with Oxfam and with funding from the Danish Arabic Partnership Programme, the Casal Dels Enfants can help 1200 young people every year. Their goal is that 10 percent of these young people will obtain permanent jobs.