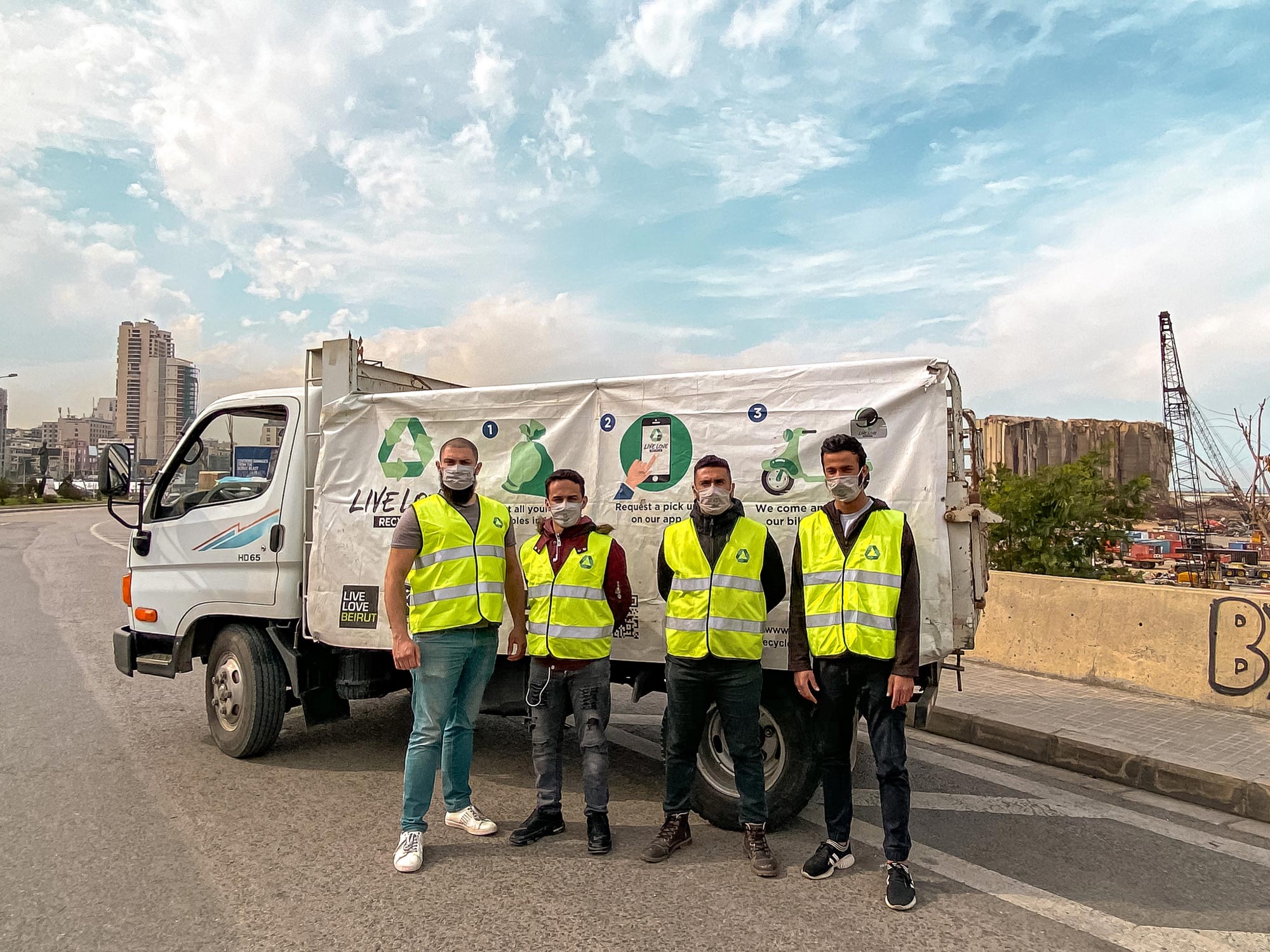 By Giada CicognolaFebruary 23, 2021May 24th, 2021Blog Articles
No Comments
Share

Georges Bitar, from Lebanon, was living in Mozambique, where he was earning a good salary and yet he was not satisfied with his life. He decided to return to Lebanon, and everything changed when he suddenly took up a mission that he felt was calling him to action.

“In 2015 I decided to come back to Lebanon and that was the time of a great garbage crisis. This wasn’t the Beirut I wanted. It’s my city, it’s the city where I was born and spent 99% of my life, so I didn’t want it to be full of garbage like it was. And instantly, without even thinking about it, without even thinking of doing an enterprise or even a social enterprise I decided to do something about this situation. I either had the option to go on the street and protest or find a solution. I wanted to recycle.”

Georges contacted all the NGOs and recycling companies in Lebanon, but none of them was available at the time: they were all busy and it was hard to reach out to them. So, he decided to create the application “Live Love Recycle”, a kind of Uber but for recycling where one can, at any time, request a garbage pickup. Today there are more than 20.000 people in Lebanon using it. The app is still free, and it is intended to remain so in order to encourage more people to recycle. It took Georges almost three years to find the funds to start operating. Then he finally found financial support from the German government and other organizations including a Lebanese NGO called Live Love Beirut, which is the NGO he is now working with. The project is allowing thousands of people to recycle and to remove tons of recyclables from going in the land fields and polluting the Mediterranean Sea. The business keeps on increasing and it is now expanding its area of service. It is also enlarging the types of items to be recycled so, today, instead of collecting only plastic, cans and metal, it is collecting clothes, nylon, white glass and much more.

Georges is earning less money than when he was living in Africa, yet, he is much happier with his life:

“Since I started the business I am always on the phone! Now at least I am happy. When I was in Africa, I was making lots of money, but I didn’t feel fulfilled. Now I may not gain the money I used to gain back there, but at least I am happy and that’s the most important for me now. “

The role of MedUp! and future perspectives

The project did not stop even though it was harshly hit by the Beirut port explosion, on August 4th, 2020. Georges himself and his family were injured, his home and his cars were destroyed. His office and machines were damaged, some project team members were injured as well. Nevertheless, Live Love and Recycle project relentlessly continued on its mission: they have installed a recycling station in the devastated area, where people can come and put all the recyclables. Also, the social enterprise is creating much needed new jobs and today they have two persons just sorting the clothes and distributing them for free to people in need. Moreover, the project is now diversifying its revenues by producing and selling carafes.

Through the MedUp! financial support Live, Love and Recycle received 10 thousand euros, which are helping them to continue on building their platform. Unfortunately, following the Beirut explosion, everything was delayed. Nonetheless, MedUp! mentors are helping Live, Love, Recycle to keep expanding. Georges strongly believes in his entrepreneurial idea and aims at expanding to other areas of Lebanon. They rely on funds but they are also creating a website to support self-financing. Given the hard political and financial situation in Lebanon, the project wishes to move its base abroad, while still aiming at expanding within the country. Live, Love and Recycle’s dream would be to continue on creating new jobs, scale up and replicate its model at the global scale.

“Believing in your ideas, stick to them. If you have an idea keep it and build on it, but also listen to what people tell you, take advice from them and be flexible also to adapt to any situation, even if you are changing a big part of your project it’s ok, just adapt to the situation by being agile and flexible. Take the opportunities but always keep in mind why you started this. We started for a need, if the need changes, we will adapt. Keep in mind that I started to clean my country and then I discovered that actually it is not a local issue but a global issue.”

This piece was elaborated with Georges Bitar from Live Love Recycle and based on the materials collected as part of the MedUp! Mid-Term Evaluation process.